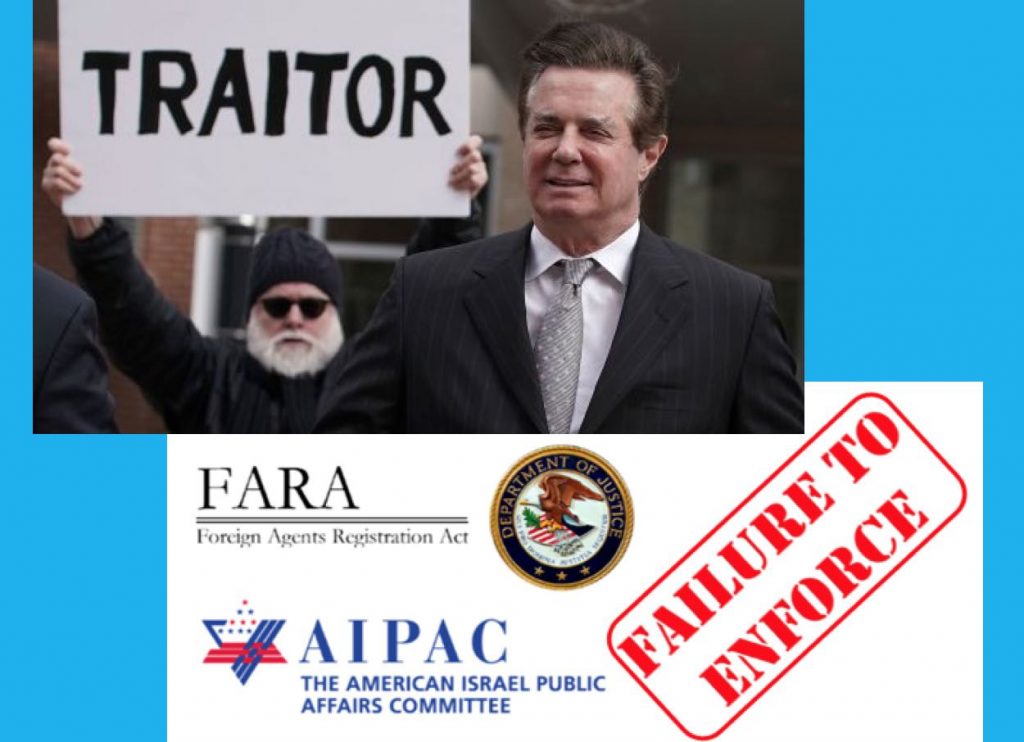 Paul Manafort’s guilty plea might bring down the Trump Administration. But it should also take down a more powerful and dangerous gang of crooks and extremists: the unregistered agents of the Israel lobby.

According to The Washington Post, the key admission in Manafort’s guilty plea is his acknowledgement that as the agent of a foreign government (Ukraine) he was required to register with the Justice Department.

“Seldom enforced until recently” is an understatement. The US government has been overrun by a swarm of lobbyists paid by Israel and its appendages, the “major Jewish organizations.” According to James Petras, there are roughly 500,000 foot soldiers of the Israel lobby in the USA. These fanatics can be relied on to unleash a torrent of angry calls and letters any time Israel’s interests are threatened. They are organized and deployed by groups flush with Israeli cash. (Israel uses its control of Congress to extract double-digit billions of dollars worth of tribute every year; according to the Christian Science Monitor, Israel had already cost the US more than a trillion dollars by 2002, and has used much of those ill-gotten gains to complete its takeover of the USA.)

Israel regularly organizes terrorist attacks on America. It got caught in the act with the Lavon Affair and USS Liberty massacre. Its orchestration of the 9/11 massacre is gradually being acknowledged by more and more serious people.

Why should Paul Manafort have to register as an agent of a Ukrainian regime that posed no threat to the US, while Paul Wolfowitz seems to have helped orchestrate the 9/11 attacks on behalf of Israel—among his other duties as an unregistered agent—without suffering any consequences?

Why should Philip Zelikow, sole author of the 9/11 Commission Report and presumed author of the script for 9/11 itself, be allowed to “create and maintain public myths” on behalf of Israel without registering as a foreign agent?

Why should Rabbi Dov Zakheim be allowed to serve as comptroller of the Pentagon and “lose” 2.3 trillion dollars the night before 9/11 on behalf of the state of Israel, without ever having to register?

Why should IDF veteran and presumed Mossad honcho Rahm Emmanuel be allowed to run Obama’s presidency from his perch as White House Chief of Staff, torpedoing Obama’s plan to end wars, close Guantanamo, and prosecute torturers, without registering as a foreign agent?

Why should Larry Silverstein be allowed to blow up his own buildings on 9/11 on behalf of Israel, confess to the deed on national television, and walk away with more than five billion cash profits, without even registering as an Israeli agent?

Why should Judge Alvin Hellerstein be given complete control of almost all 9/11-related litigation so he can quash discovery and cover up the truth on behalf of Israel, without ever registering with the Department of Justice as a Zionist agent?

Why should Jerome Hauer be allowed to help orchestrate the 9/11 and anthrax attacks on behalf of Israel without ever having to even register?

Why should the owners and editors of most of the mainstream media (MSM) and most of the pseudo-alternative media, including the right-wing as well as left-wing versions, be allowed to cover up 9/11 and otherwise carry water for Israel without even registering?

Why should Hollywood be allowed to remain virtually 100% Zionist owned and operated without registering as one gigantic Israeli propaganda factory?

And why should internet oligarchs like Mark Zuckerberg be allowed to run their monopolies as Israeli propaganda outlets—to the point of banning Veterans Today because it tells the truth about Israel and its “American” assets—without registering as a foreign agent?

These are just a few of the questions raised by Manafort’s guilty plea. One of these days Americans—meaning people loyal to the USA not Israel—are going to demand some answers.